Medical education business LevelEx, which melds the worlds of medical education and virtual reality video games, has closed an $11 million Series A round. Sam Glassenberg, founder and CEO of Level Ex, said in an email that the funding would be used to add different case scenarios to the company’s Airway Ex simulator app. It also has plans more apps in the product pipeline for virtual reality and augmented reality based on market demand coming in from the medical device and pharma industry, and medical societies interested in these technologies as a new format for continuing medical education.

4490 Ventures led the Series A but JAZZ Venture Partners and Pritzker Group Venture Capital also took part, alongside other investors.

Simulator device businesses catering to the medical education industry are finding a receptive audience with the relatively high cost of cadavers, the increased ethical sensitivities (and expense) of using animals for training and the need for helping young and mature physicians develop and maintain their surgical skills.

One product it developed, Airway Ex, offers challenging airway procedures using different medical devices along with anesthesia simulations. It claims that their virtual patients breathe, bleed, respond to pressure, and experience the kinds of reactions physicians would see on real patients. A device to simulate endoscopic surgery in the GI tract, Gastro Ex, is in development.

The company has worked with hundreds of physicians, particularly medical educators, to understand the knowledge gaps by method, such as reading articles, 2D images, videos, low-fidelity simulations, and cadavers that provide no feedback, observation, and live patients, according to Glassenberg.

“This allowed us to figure out where our technology can surpass the current training standards employed today. We then rigorously conducted user testing in a beta environment to gather feedback to ascertain how our solution provided more value over current methods. Our early prototypes for Airway Ex have published efficacy studies conducted at academic institutions that showed it improved physician performance.”

He added that it tested its lead simulator, Airway Ex, with more than 1,000 anesthesiologists from June to December 2016. 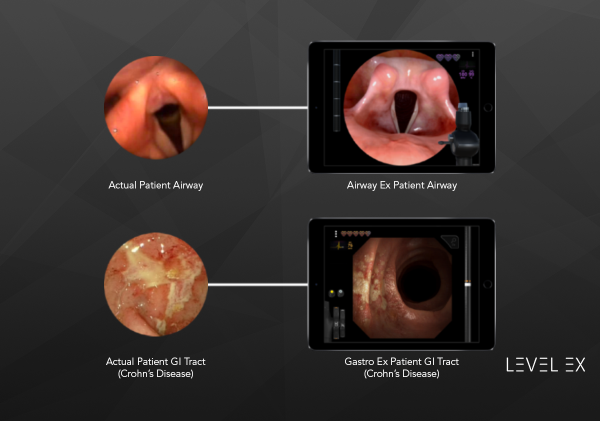 Since May, Level Ex has been testing Gastro Ex with more than 700 gastroenterologists.

The advantage of its simulator tools over a cadaver or other methods of training is that they can be varied to reflect not only a wide range of conditions, from normal anatomy to rare and complex patient cases,  but also the reality of different institutions such as patient load composition influenced by geography, population type, and staffing at the institution.

It can also be used for “recreating new devices and procedures, immediately expands physicians’ knowledge and recall of that scenario to support better decision-making when they see it in the real world,” according to Glassenberg.

Level Ex also works with pharma and medical device companies. Glassenberg explained that its apps give them a way to distribute their product information, especially across channels being heavily used by physicians, like mobile devices.

“Level Ex’s professional video games create a captive environment because physicians are so deeply engaged with the product’s competitive game mechanics and interesting patient cases. Also, those patient cases are often in the same therapeutic area as the brand, so there is immediate relevance and applicability from a commercial perspective.”

Customers include Medtronic, Baxter and Takeda, among other pharma and medical device companies. Medtronic is a partner in the Airway Ex app leveraging AIRKit. The company launched the Gastro Ex app with Takeda at the DDW conference in the spring.

Medical associations in anesthesiology, emergency medicine, gastroenterology, and general surgery are offering Level Ex’s products to their physician members to change the way they take board certification exams and earn continuing medical education.

“Offering this through video games, VR, and AR to their physician members is something that has never been done before in the industry,” Glassenberg noted